Using WiiMote’s with your AIR for Android Applications

NOTE: I use WiiMote app now instead of WiiController. I also use a Motorola Atrix and the WebTop app.

I demoed an application at my MAX session using 2 Wiimotes, a Droid X, and HDMI out to a TV. I am finally getting around to blog about the Wiimote and AIR Android setup. I have the code of the game I wrote for the demo, the art work was inspired by my 5 yr’s drawings. The code is actually quite simple to make this work but it takes some explaining on how to setup and how it works.

First here is a picture of the game and the two Wiimotes connected to the Droid X. 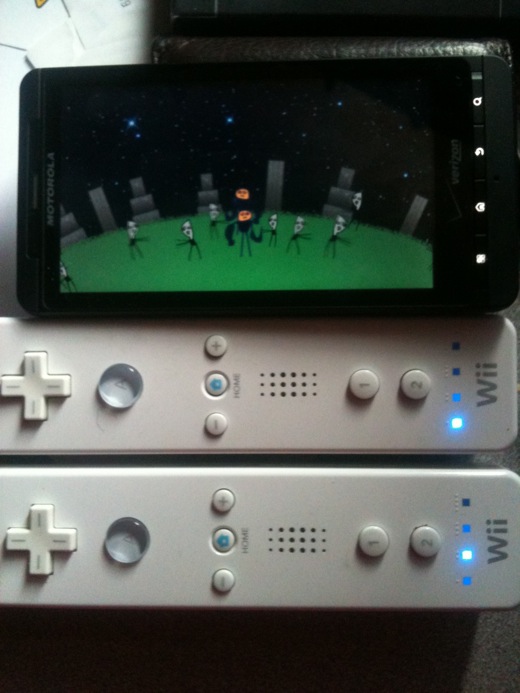 First thing is to understand Android’s support for Input Method Emulators (IME). The IME on Android is kind of like window’s IME where it supports different language input methods. On Android the IME’s are typically used for difference keyboard input methods, for example the Swype that comes with the Droid X is just another IME that is turned on by default over the default Android virtual keyboard. This leaves us with the question what does that have to do with Wiimotes?

What this means is a developer has created an Android application that uses Bluetooth to connect the Wiimotes and then translates the Wiimote button’s into actual keystrokes. The accelerometer on Wiimote is not supported as that produces more data then a simple keystroke.

Steps to setup the WiiControllerIME

What does it take to access the Wiimotes in your application?
Since Android’s IME just remaps inputs to keyboard events its pretty simple to access the data in your application. As a developer you just listen for keyboard events and figure out what keycodes each button is mapped to. In the case for 2 wiimotes (it can support up to 4) the button’s are mapped to different keycodes, ie: Wiimote 1 button 1 is mapped to X keycode and Wiimote 2 button 2 is mapped to Y keycode.

MAX Demo and HDMI out
For the MAX demo I also used a Real HDMI android application from the Android marketplace that is specific only for the Droid X. It allows for applications to be outputted through the HDMI out, where the built in app only supports images and videos. The demo was cool because it was basically like having a console in your pocket, where you can pull it out and play games on a TV with Wiimotes.

A few notes about this setup

Like I mentioned in the first part of the post the source for the game I used is available on github pull down the source and read the README file as it requires a library that I used for multiple of my demos.